The Supreme Court has failed the Constitution 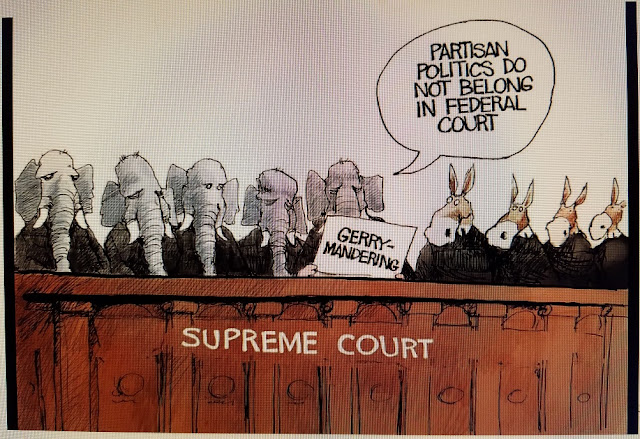 Gerrymandering is nothing new. It happens when political insiders draw district lines to benefit themselves or their parties, or to squeeze minorities out of power. In the very first congressional election, Patrick Henry drew a misshapen district in a bid to keep James Madison from winning. But lately, with digital technology and partisan ruthlessness, gerrymandering has gotten much worse. Highly precise gerrymanders dilute the voting strength of an emerging nonwhite majority.

Gerrymandering may not stop the underrepresented from gaining power, but it can slow fair and accountable government. Consider North Carolina, one of the states whose rigged maps were blessed by the Supreme Court on Thursday. North Carolina’s electorate is evenly divided, yet the congressional map is deep-red; Republicans hold 10 seats, Democrats only three. How could that happen? The legislator in charge explained he would have created an even starker imbalance had it been feasible: “I do not believe it’s possible to draw a map with 11 Republicans and two Democrats.”

On Thursday, five conservative justices said there was nothing they could do about this. Gerrymandering, they ruled, was a “political question.” That sudden reluctance to get involved in political matters is especially rich coming from the court that struck down a century of campaign finance law in Citizens United and gutted the Voting Rights Act in Shelby County a few years after that.

The framers, keen students of human nature, were acutely aware of abuses of power. Concern over fair representation was one of the reasons they staged the revolution and wrote the Constitution. “No taxation without representation” was the slogan of the original tea party. They worried about corrupt England, with its malapportioned “rotten boroughs,” and fretted about Old Sarum*, a hilltop in England with no people but a seat in Parliament. John Adams said the first principle of a republic was that the legislature should be “in miniature, an exact portrait of the people at large.”

They wrote these concerns into the Constitution in a provision called the elections clause. It gives states the power to set the “times, places and manner” of elections, but gives Congress the power to override as a check against self-interested state politicians. It’s an unusual provision — one of the few that gives the national government the authority to intervene in state law.

Two delegates from gerrymandered South Carolina tried to strike the language when the Constitution was still in draft. Madison was aghast. He found it essential since, as he said, “It was impossible to foresee all the abuses that might be made of the discretionary power.” Madison knew that insiders would try to draw district lines to “favor the candidates they wished to succeed.” But he believed the people should choose their representatives, not the other way around.

Similar concerns were raised as the Constitution was ratified by the states. At the Massachusetts ratification convention, Theophilus Parsons warned that without federal oversight, “in times of popular commotion, and when faction and party spirit run high, (it) would introduce such regulations as would render the rights of the people insecure and of little value,” and would “make an unequal and partial division of the state into districts for the election of representatives.” Sound familiar?

In their wisdom, the framers pointed the way for what must happen next. When the Supreme Court refuses to step in, Congress and the states have the power to end extreme and abusive partisan gerrymandering. Just as the elections clause envisions, the House of Representatives this year passed a national requirement for states to use redistricting commissions as part of H.R. 1, the For the People Act. Senate Majority Leader Mitch McConnell, R-Ky., is blocking it from a vote in the Senate. Without irony, he calls it a “power grab.” The Supreme Court plainly seems to disagree.

And just this month, New Hampshire’s legislature sent a bipartisan bill to Gov. Chris Sununu that would create an independent advisory redistricting commission to redraw the state’s political boundaries. The state would join others including California, Arizona and Ohio in using independent panels. In November, voters passed five ballot measures to curb gerrymandering. Michigan, Colorado and Utah created strong independent commissions. In Thursday’s opinion, Roberts wrote approvingly, “Numerous states ... are restricting partisan considerations in districting through legislation,” and went on to cite the wave of recent voter victories.

Let’s hope he means it. In 2015, the court emphatically endorsed state ballot measures to curb gerrymandering. But four dissenters argued that voters cannot fix gerrymandering this way, and conservative advocates have even claimed Congress lacks the authority under the elections clause to create redistricting commissions. None other than the chief justice wrote the dissent. Voters could not constitutionally pass such reforms, he wrote then. His new decision points in a different and better direction.

When the framers drafted the elections clause, they did not imagine today’s supercharged, software-aided, partisan gerrymandering. But they certainly thought, as a bedrock principle, that the people, in the states and in Congress, had the power to act.

If [Since] the Supreme Court won’t follow the spirit of the framers, we the people have no choice.

This op-ed previously appeared in the Waynesboro Record Herald

* Although the settlement was effectively uninhabited, its landowners continued to have parliamentary representation into the 19th century, making it one of the most notorious of the rotten boroughs that existed before the Reform Act of 1832. -- Wikipedia
Posted by Steve Muratore aka Arizona Eagletarian at 1:38 PM