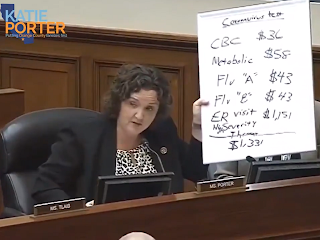 When I came to Congress, I knew I had a responsibility to pull back the curtain for the American people and expose corruption in real time. So, I’m filling you in on Senator McConnell’s attempts over the last 8 days to tank a *bipartisan* COVID relief bill. (THREAD)

You may have heard that Democrats and Republicans have agreed upon spending $900 billion to fund another round of small business loans, support hospitals and essential workers, and help the 10 million people who lost their jobs through no fault of their own. (2/5)

Everyone at the negotiating table—including Senate Rs—has agreed to a compromise. Except one. Mitch McConnell is refusing to bring it to the floor unless it wipes away all COVID-related lawsuits filed that “allege injury or death” due to corporate negligence. (3/5)

These lawsuits represent the worst of the worst examples of disregard for human life—cases filed on behalf of nursing home patients and grocery store workers who died because the company in charge of keeping them safe prioritized cutting costs over protecting them. (4/5)

The same McConnell who said that President Trump is “100% within his rights” to pursue baseless lawsuits alleging election fraud is now refusing to pass urgently-needed relief unless it strips those same rights from the most vulnerable among us. This must be exposed. (5/5)

Let's all help Katie Porter expose Moscow Mitch's corruption. Please CALL your US Senators and Members of the House of Representatives.

Posted by Steve Muratore aka Arizona Eagletarian at 2:50 AM No comments:

In the Hands of the People -- Thomas Jefferson's insight

The legitimate powers of government extend to such acts only as are injurious to others. But it does me no injury for my neighbor to say there are twenty gods, or no god. It neither picks my pocket nor breaks my leg. - TJ, Notes on the State of Virginia, QUERY XVII (page 24, In the Hands of the People, edited by Jon Meacham)

We have solved, by fair experiment, the great and interesting question whether freedom of religion is compatible with order in government and obedience to the laws; and we have experienced the quiet as well as the comfort which results from leaving every one to profess freely and openly those principles of religion which are the inductions of his own reason, and the serious convictions of his own enquiries. - TJ, to Virginia Baptist Associations of Chesterfield, November 21, 1808 (ibid, page 25)

It appears clear that neither Jefferson nor any other of the Founders much imagined or contemplated the egregiousness of demagogues like Donald Trump ever presiding over the federal government of the new Republic. If they had, we likely would have read of it in their writings.

Further, the insidiousness of Dominionist actors such as Cathi Herrod on state legislatures such as Arizona's likely crept in because a century or more of elapsed time blurs experience and the words of philosophers and political scientists.

Herrod's rhetoric is especially insidious because she strives to make it sound innocuous. Unless one understands why she frames depriving women of personal sovereignty regarding their body and health care decisions, "protecting the unborn," deceives the listener into being an unwittingly co-conspirator in the deprivation of sacred rights and liberty for already breathing humans, roughly half of the population. If questions of women's rights weren't consistently mislabeled as "right to life," so much more than forced birth would have to be included.

Posted by Steve Muratore aka Arizona Eagletarian at 3:55 PM No comments:

By Rick Wilson, previously published at The Daily Beast

The dark is rising for Trump’s sycophants, toadies and enablers. Their tough-guy acts and fuck-your-feelings shit-talk have become a furious whine of complaints and recriminations as a toxic slurry of rage and despair has left a stinging bile in the back of their throats that won’t go away. Trump lost, and they can’t spin their way past it.

Even as his lawyers are all but chased out of each town where they file their absurd, doomed lawsuits, The True Believers still imagine some miracle emerging from the wreckage of Trump’s campaign. The media apparatus that monetized the moronic state religion of Trumpism is still pumping their slowcoach followers full of stupid, easily disproven lies.

The Professional Class of Republicans, though, know that the bitter end is here—that their dirty half-decade of personal abnegation and degradation is coming to a sick, sad finale. It would leave them with a sense of shame if they had any. Most of the GOP, Inc. types long ago lost that sensibility. Still, America is watching them experiencing a combination of fury and humiliation as Trump heads to the door before even dropping the cash on the nightstand.

To our old friends and colleagues still stuck in Trump’s GOP, well, bless your hearts. You’re not getting out of this one with the old “run for the tall grass” strategy that served you so well before. In the time before social media, you might’ve slunk into some dark corner for a year or so and muttered over cocktails about how crazy it was when Trump was in office and the shit you had to do to stay in his crazed graces.

But we live in a world where the internet is forever. The video of your self-abasement is copious, and your slavish devotion to Donald Trump will mark you forever. That’s you, Congressman. And you, Senator. And you, Governor. And an army of lobbyists, consultants, and advisers who pretended this was perfectly normal.

On your best days you furrowed a brow or issued an elliptical Bible verse in the most weak-dick passive-aggressive statements possible.

Let’s be honest with one another, though; most of you enjoyed every moment of Trump. You boasted that the world had changed. You bragged that finally there was a Republican badass who gave no fucks and owned the libs. All we had to give up to get there was everything that defined the center-right party for generations. You were just fine with the executive orders, the lawlessness, the statism, the betrayal of alliances around the world, and with that fucking clown as the leader of the party and the country.

But voters have a longer memory than you credit them with.

We also won’t forget the grubby sellouts in the Respectable Republican Media, with their strained contortions about how “Trump is bad, and we wish he wouldn’t tweet, but without him, AOC and George Soros will force mandatory green sharia socialist gay marriage on our pets.” That set is, in some sense, more contemptible that the gleeful sellouts who went full MAGA. I’m shocked seppuku hasn’t made a comeback among these people who hate themselves for their shabby, wretched series of personal and moral compromises under Trump.

That goes double for you motherfuckers who went inside the Trump White House and kept promising that you were the one who was stopping all the bad shit from coming down. Either it was always a lie from the beginning, or you sucked at your jobs.

After 250,000 deaths from COVID, a shattered economy, rampant corruption, and the egregious cruelty of the Trump era, no one forgets that you stood behind him and saw the lawless, reckless, rampant fuckery of Trump and Trumpism with nary a complaint. You stood there, cowed and callow, profiles in chickenshit more dedicated to re-election than to America. Now, you’re getting what’s coming to you.

I’m not even going to hide it; I fucking love it.

I know, I know. Some people believe we should enter a new era of comity and goodwill and that the Biden era will be a time of healing and cleaning up the national fabric that’s been stained from five years of Donald Trump ratfucking the nation’s character and psyche. We should offer a soft landing and a gentle exit from the Trump cult to give the conservative party of the United States a way to reclaim its values and virtues, right?

To this, I must issue a hearty “fuck no.”

This nation dodged a bullet only through the tireless efforts of millions of Americans determined to drive Trump from office. We barely got out of this one with the nation—and our sanity—intact.

Accountability and responsibility were once hallmarks of character-based conservatism. They were central to the GOP’s political brand. And, as Republicans once knew, actions have consequences. In politics, business, community, and life, the conservative choice was one of probity, restraint, respect for law and tradition. Trading that in for “cry moar libtard shill” and “Your snowflake tears sustain me, cuck” has consequences.

It’s not enough merely to enjoy their agony and humiliation. It’s not enough to hope they’ll be shamed and correct their behavior. Have you not met these people?

There is no facile “both sides” argument here. This election was America versus the Trump criminal enterprise, and the people who made up the Vichy Republican claque shouldn’t merely be allowed to drift away from Trump with a shrug and a “Let’s put this behind us.”

The Trump administration’s malfeasance, corruption, sadism, and fatal incompetence require a public, media, judicial, and political response. If no one is held to account for unequivocally illegal actions and for empowering and enabling the people who committed them, you know what we get, right?

More of the same.

Many Democrats, likely including Speaker Nancy Pelosi, will mistake the terrain ahead. They believe that “getting things done” is the coin of the realm. The Democrats will be shocked when Republicans derail their agenda, over and over again. They’ll think, “We’d rather discuss the Green New Deal than put the last four years under the spotlight again,” but that spotlight is the insurance policy they need as McConnell does his work. The Democrats should understand—but likely won’t—that Mitch McConnell’s role as Trump’s stay-behind vergeltungswaffen [revenge weapons] is only beginning.

The other side will work daily to sabotage not only a legislative agenda but the nation itself. Remember, the Trump GOP is shorn of all ideological and philosophical pretense, and even when Trump leaves office, it’s not over. His cultists’ reign of terror will shape elected GOP members as long as he and his foul spawn walk the earth unpunished.

Only exposure, pain, humiliation, and (inshallah) incarceration will lead to a moment of reckoning for the GOP. It should start at the top and work down from there.

Posted by Steve Muratore aka Arizona Eagletarian at 7:15 PM No comments: