“Free to be Ruth Bader Ginsberg: The Story of Women and Law” by Teri Kanefield 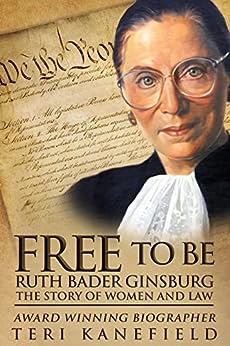 Teri Kanefield's “Free to be Ruth Bader Ginsberg: The Story of Women and Law” is so much more than the title suggests.

American history began as and has been a constant quest for freedom. From multiple forms of oppression. The Union (of the original 13 states) was far from perfect. Hence the Preamble to the Constitution, “We the People... in Order to form a more perfect Union, establish Justice, insure domestic Tranquility...”

Even now, 240 years after declaring independence from England, we have so much work to do to perfect the Union. Our nation's stories often revolve around heroes. Kanefield offers a dynamic, delightful and compelling telling of the story of a diminutive giant of a heroine, one of the most important contemporary figures in the ongoing quest for a Just, domestically Tranquil society.

Ruth Bader Ginsberg personifies, regarding civil rights law, particularly on gender and racial issues, Teddy Roosevelt's oft quoted adage, “Speak softly, but carry a big stick.” Ginsberg's stick, for more than fifty years, has been the practice of law, including as a law school professor, appeals court judge for the DC circuit and Supreme Court Justice.

Setting the stage by illustrating with female law pioneer Myra Bradwell's experience, Kanefield weaves together a wonderful patchwork of case law and life experiences on how Ginsberg patiently but persistently knocked down immense walls precluding women and men from opportunities to lead fulfilling lives according to how each sees fit. Bradwell, in 1869 passed the Illinois Bar exam but Illinois refused to grant her a license to practice because “a woman had no legal existence apart from her husband.”

The barriers to women's – and because rights can be a double-edged sword, certain men's – rights have been challenged many times since. In 2016, barriers still do exist.

For example, as a practicing attorney and law professor, Ginsberg took on the case of Stephen Wiesenfeld, whose wife died in childbirth. Even though his wife was the primary breadwinner in the family, Social Security denied the man survivor benefits which he needed in order to raise his newborn son. A law student at the time, Sandra Grayson, said “working alongside Ruth was like fighting an uphill battle that you might actually win.”

Kanefield relates that (according to legal scholar Herma Hill Kay) “Quite literally, it was her [Ginsberg's] voice, raised in oral argument and reflected in the drafting of briefs, that shattered old stereotypes and opened new opportunities for both sexes. She built, and persuaded the Court to adopt, a new constitutional framework for analyzing the achievement of equality for women and men. In doing so, Ginsburg in large part created the intellectual foundations of the present law of sex discrimination.”

Justice Ginsberg's mark on American law will be indelible because the potential for American women to make great contributions to society is vast and runs deep.

For me, this is personal. My daughter is the primary breadwinner in her family and my granddaughter could one day follow in the footsteps of a human rights pioneer like Ruth Bader Ginsberg.

Free to be Ruth Bader Ginsberg, by Teri Kanefield in my opinion is a must read.
Posted by Steve Muratore aka Arizona Eagletarian at 11:41 PM No comments: