What is the AZ redistricting commission up to with it's latest subterfuge? UPDATED 10 pm April 29, 2021

The first and maybe the most important question is why Arizona's newest iteration of the Independent Redistricting Commission LIMITS public comment AT ALL. I have posed that question to this IRC in time sanctioned comments, but never received any response. Could that have been because Andy Tobin, Ducey's "fixer" (and current director of the Dept of Administration) was overseeing things when I posed the question the first several times?

Tobin has served (been appointed by Ducey) to head other Arizona executive branch agencies as well as (also appointed by Ducey) to fill a Corporation Commission seat when an elected member resigned to work in the Trump administration. Tobin was also Speaker of the Arizona House of Representatives when the legislature sued the 2011 IRC (all the way to the US Supreme Court) because he didn't like that the voters had taken the power to gerrymander legislative and Congressional districts away from him. Review my blog posts from March 2015 and earlier on that very topic.

Because Tobin was now in a position to influence how the 2021 IRC established itself and decided to operate, he could be like The Great Oz. Pay no attention to the man behind the curtain.

Nevertheless, the commission is ALL about, according to the initiative voters approved to pioneer citizen driven independent redistricting, HEARING what the citizens/voters want to tell them about what they are charged by the Arizona Constitution to do. But the IRC under Dr. Erika Neuberg has been nothing at all like that.

Under the direction of Gov. Doug Ducey, the Commission on Appellate Court Appointments, charged with vetting candidates for the commission, eliminated some of the most qualified candidates for the most frivolous of reasons, like that some had worked with--God-forbid--former Democratic Governor Janet Napolitano. 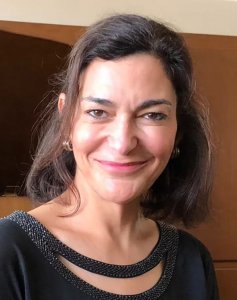 Erika Neuberg presented a (very) strong personality and had donated money to Ducey's campaigns for governor. She's a trained psychologist. Beside being quite confident at conducting meetings (thus far all of the IRC meetings have been on ZOOM or YouTube), Erika seems to be a competent manipulator.

Where Colleen Mathis was open and vulnerable, which signaled willingness to consider the views of the four other commissioners AND Arizona citizens who showed up for meetings and hearings, I don't see that at all from Erika. Erika presents a tough façade. Presenting as vulnerable is an indicator of strength of character. Tough façades can mask character weaknesses.

Moving on, the IRC is now trying to figure out which mapping consultant to hire. Two of the contenders have serious history with Arizona's redistricting process. But what is being discussed or written about publicly does NOT match the details of that history.

First, as reported this week by Jeremy Duda of the Arizona Mirror,

Last week’s presentations and interviews were held behind closed doors, in executive session, a requirement of Arizona’s procurement laws. The commissioners are barred from publicly discussing anything that occurs in executive session. Republican Commissioner David Mehl said all three firms interviewed well and provided a lot of details.

“I’m sorry the public was not able to observe that,” he said.

Opposition to the Timmons Group largely revolves around its partnership with National Demographics Corporation, which served as the mapping consultant for Arizona’s first redistricting commission in 2001, and the company’s president, Doug Johnson. Democratic organizations and individuals objected to the company’s Republican ties and its history drawing maps that they allege disenfranchised Latino voters.

What Jeremy left out of that report is that Doug Johnson wasn't fired. He redrew the maps after DOJ rejected the first attempt. That second effort ended up producing a supermajority for Republicans. They flexed that supermajority muscle in 2011, and along with then Gov. Brewer, tried to decapitate the IRC. It succeeded... for about a month.

The AZ Supreme Court reinstated Mathis after oral arguments presented by former Chief Justice Thomas Zlaket. Among the chief complaints against Mathis, at the time, were related to selection of Strategic Telemetry as mapping consultant. Strategic Telemetry principals later formed HaystaqDNA, which is one of the firms now bidding for the mapping consultant job with the  2021 IRC.

Now, about David Mehl's overtly disingenuous expression of regret that the public was unable to observe the interviews with mapping consultant bidders. In 2011, because the IRC chose to NOT participate in the state procurement process for selection of that consultant, the interviews were ALL observed by the public. The voters, in passing the initiative that enabled independent redistricting, gave the commission the option to follow state procurement rules or not.

A decision Mehl and his colleagues made this time is THE SOLE reason the public was excluded from observing the interviews. Mehl, Nueberg and company chose to comply with the state procurement process, which--beside excluding the public--again gave Tobin clandestine influence over the selection.

Begging for the public to weigh in on the bidders really almost certainly had hidden purpose.

After Doug Johnson's team drew rightful pushback in the media and from citizens this week and last, the only way they could justify hiring him would be if they got copious public comments demanding they do so... as well as comments trashing Haystaq.

They do NOT have to be allowed to get away with it. It's up to you.

I leave you with this thought.

The legislative maps drawn by the 2011 IRC are most fairly and appropriately characterized as maps favoring which political party? Consider that the only fundamental difference between the 2001 and 2011 maps is that GOP control was NOT a supermajority from 2012-present, like it had been in the previous decade.

The 2011 maps STILL favored the Arizona Republican Party. That party has been in control of the legislature EVERY year in the last TWO decades. And then some, but key to this post is the decades with maps drawn by Independent Redistricting Commissions.

Why would Arizona citizens cede the legislature to Doug Johnson's and Andy Tobin's efforts to restore Republican supermajority, and hence ONE PARTY rule in our state?

Submit public comments early and often. And perhaps ask why the current commission is so afraid to let citizens and voters have a say in how this IRC does it's business?

Are we still a democracy, or do we accede to autocracy?

And if you ever get an error message saying your comment is not accepted because of time constraints, send me an email with the details or contact me on Twitter @AzEagletarian.

Please note that people today have Tweeted that Neuberg has publicly stated the only comments subject to disclosure publicly are those submitted during official meetings of the IRC. If she said that, she's wrong. ALL comments submitted in writing or by voice to the IRC are subject to Arizona's Public Records law.

Arizona law requires all officers and public bodies to maintain records reasonably necessary to provide an accurate accounting of their official activities and of any government funded activities.

Records are defined as books, papers, maps, photographs, or other documentary materials regardless of physical form or characteristics, made or received by an governmental agency in pursuance of law or in connection with the transaction of public business and preserved by the agency or its legitimate successor as evidence of the organization, functions, policies, decisions, procedures, operations, or other activities of government. Examples of public records and other matters include calendars, reports, legal memoranda, policies and procedures, accident reports, training videos and materials, tape recordings of meetings where there are no written minutes, personnel records, case files, and data bases.

Posted by Steve Muratore aka Arizona Eagletarian at 3:36 PM No comments:

Time and space would fail me to set forth here adequate background for you to understand the situation simply from my telling of it. You can read more and get up to speed by searching the internet for "Karen Fann" and "Stop the Steal." There are news stories in the AZMirror, AzCentral, Salon.com, AZ Capitol Times, the AZ Daily Star and more.

My impression from the start of this misadventure is that Fann, at the urging of former Senate Judiciary Committee Chair (former) Sen. Eddie Farnsworth, crAZy lady Sen. Kelly Townsend, and more is that Fann has been digging herself a hole that she ultimately may not be able to climb out from. Now, five full months AFTER the 2020 general election, after every official elected in that contest has taken office, she may, mercifully, have been handed an exit strategy to stop the boondoggle.

The Protect Democracy Project, along with three prominent Arizona law firms which practice election, political, and government related law issued a cease and desist letter dated today (April 6, 2021) addressed to the firm Fann ostensibly has contracted with to conduct an unnecessary, obviously duplicitous or duplicative (or both), and apparently illegal "audit" of the 2020 general election in Maricopa County.

Here's an excerpt from Cyber Ninjas statement of work. This is where two key pieces of the puzzle converge to poke a huge hole in the entire proposal/project. 1) This (possibly fly by night) outfit apparently has NO certification attesting to its integrity or experience; and 2) Since Mr. Logan's bias is quite obviously on record, there is no basis for any kind of trust that he would conduct such work fairly and accurately even if certified. Such voter contact as he proposed would brazenly constitute voter intimidation.

Cyber Ninjas is a cyber security consulting company specializing in software security. We work with organizations to help build and validate secure software.

So, it's really no wonder that since they claim specialization in software security, they may not really have a sense of why contacting voters either by phone or going to their door would constitute voter intimidation.
Now, back to Karen Fann. The first rule of holes dates back at least to 1911:

“Nor would a wise man, seeing that he was in a hole, go to work and blindly dig it deeper…”

In other words, STOP DIGGING, Karen.

It's not like she's the first or only Arizona elected official to find herself continuing to dig. In November 2011, then Gov. Jan Brewer dug herself a deep hole when she took the advice of similar political interests who tried to stymie the Arizona Independent Redistricting Commission by firing IRC chair Colleen Mathis. Jan kept digging, but not for five months, like Karen has.

Jan came face to face with the Arizona Supreme Court ruling which held that she had unlawfully ousted Mathis. At that moment, Jan realized the game was over. She then graciously accepted the ruling and the IRC resumed its work.

It has been obvious for months that Karen is in a predicament of her own making. If she proceeds, litigation is certain. She will absolutely lose, just like Trump and his minions have already lost 60+ lawsuits in the Quixotic endeavor to put the former guy back in the White House.
Posted by Steve Muratore aka Arizona Eagletarian at 10:15 PM No comments: