World renowned computer scientist Admiral Grace Hopper (1906-1992), as a way of busting through military bureaucracy and promoting innovation, is credited with the saying, "it's easier to ask forgiveness than permission." Unfortunately, that saying is often employed to escape accountability for "inadvertent" election tampering.

To view video of Ryan explaining the complaint and answering questions from reporters, go to azfamily.com. (I have trouble embedding video from that website)

According to state statute, elections for ballot measures must be preceded by timely delivery of disclosure and explanation to all voters of the questions they are being asked to decide. Ryan's complaint cites violations of Arizona Revised Statutes §§ 19-101.01 and 19-123 and references the Article VII, § 12 of the Arizona Constitution, which states,


There shall be enacted registration and other laws to secure the purity of elections and guard against abuses of the elective franchise.

19-101.01 was passed by the legislature because they were pissed off about those pesky voters who thought they knew better than the elected representatives. Now they may find themselves hoisted upon their own petard. This provision requires strict, rather than substantial compliance with election procedures regarding referenda.


The provision Secretary Reagan (a person) must comply with is in 19-123,


A. When the secretary of state is ordered by the legislature, or by petition under the initiative and referendum provisions of the constitution, to submit to the people a measure or proposed amendment to the constitution, the secretary of state shall cause to be printed, at the expense of the state, except as otherwise provided in this article, a publicity pamphlet, which shall contain: [a list of six items follows] [...]

B. The secretary of state shall mail one copy of the publicity pamphlet to every household that contains a registered voter. The mailings may be made over a period of days but shall be mailed in order to be delivered to households before the earliest date for receipt by registered voters of any requested early ballots for the general election.

Of course, Mr. Roberts immediately began the process of minimizing the Secretary's error and rationalizing it away.


Roberts acknowledges the 200,000 pamphlets are going out after the deadline, but he doesn’t see this as having a major impact on voters.

“Many folks I’m sure take the time to educate themselves via their local newspaper, the media, their legislators. We make a lot of information available on our site,” he said, adding that publicity pamphlets are a part of that.

As for why they didn’t alert the public back at the end of April about the problem?

“In all candor, we’ve been focused on getting those pamphlets out immediately and as soon as possible,” Roberts said.

From the azfamily.com story,

The error, according to Ryan, potentially means 400,000 voters were left without publicity pamphlets when early voting began April 20.

These pamphlets provide information as well written arguments for and against two current ballot propositions: Proposition 123 and 124. [...]

The problem is the latest to plague Arizona's election system.

In March, Maricopa County voters stood in line for up five and six hours to cast their ballots in the presidential preference election.

Last month, errors on the Spanish language May 17 ballot were discovered, costing taxpayers $400,000 to fix.

Ryan is no stranger to political fights.

Last year he forced the resignation of the chairwoman of Arizona Corporation Commission, Susan Bitter Smith, over a conflict of interest.

The Arizona Republic reported on the complaint,


Ken Bennett, who was secretary of state from 2009 to 2015, said there were no complaints from voters about not receiving their pamphlets in earlier elections. And Bennett, who now lives in Pinal County, said he thought it was curious when he received his pamphlet just a few days ago.

"I wondered why we didn't get our pamphlet 30 days early," he said.

He said initial explanations from the Secretary of State's Office that the 2011 policy was intended to spare voters on the early-ballot list from getting the pamphlet "made no sense."

"That's exactly who should get it," Bennett said, noting those voters by definition cast their ballots ahead of the official election day and need the information in the booklet.

Corporate media and American governmental institutions typically are loathe to acknowledge election tampering, given the sheer complexity of the systems that must be employed in order to facilitate the process of casting, collecting, counting and reporting on millions of votes; in national elections, hundreds of millions of votes.

However, EVERY election system is subject to intentional and unintentional errors. Even inadvertent problems can (adversely) impact the outcome of any given election. The higher the stakes, the higher the likelihood that somebody will try to influence the election in ways that subvert the will of the people.

In Arizona, found by Harvard researchers to be the most corrupt state government in the country, that should be considered a given.

In the upcoming special election, with billions of dollars at stake, should we give either Reagan, or Scrooge McDucey, the benefit of the doubt?

By the way vote NO on Prop 123, whether the election is held on May 17 or some other time. 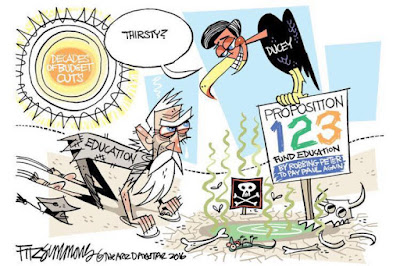 Cartoon posted by authority of the Fair Use Act.


Posted by Steve Muratore aka Arizona Eagletarian at 8:00 PM No comments:

What does it take to enact substantive societal change?

Has any major change in American society, or throughout human history, occurred without a movement?

An important tactic in political movements is civil disobedience.


Hope is belief in the plausibility of the possible, as opposed to the necessity of the probable.

Keystone turned out to be a great victory because all over the country and the world, people looked up and saw that you actually can beat big oil.

It may seem impossible right now to defeat/prevent climate chaos, but social movements have shown that the limits of the possible are there to be moved.

To practice civil disobedience is necessary to be able to pursue a better life for our people.

It’s the people who are engaged that determines what government does. And all we have is a choice to make about whether we’re going to be one of those people or not.

Join the global movement to keep fossil fuels in the ground.


Depending on the outcome of the 2016 general election, more civil disobedience may be necessary nationally.

In Arizona, because government, political, and election systems are so dysfunctional and corrupt, civil disobedience may become a prerequisite to keeping our state from becoming an official Koch Enterprises colony.

Today it is a case of the grasshopper pitted against the elephant. But tomorrow the elephant will have its guts ripped out. Le Loi, Vietnamese emperor, 15th Century

Posted by Steve Muratore aka Arizona Eagletarian at 7:47 PM No comments: