A magnum opus by Suzanne Whitaker and Lainey Prather

Suzanne and Lainey were personally invested (time and energy) for four years. The 17 works of art are truly magnificent.

"We are Suzanne Whitaker and Lainey Prather, two Arizona based artists. We are so grateful to receive a grant from the Arizona Commission on the Arts. Our proposal is to create nineteen portraits of nineteen noteworthy American women who with their hearts and ambition changed things for themselves and others. This project is to honor the long fought battle for passage of the Nineteenth Amendment, when (most) women finally were able to vote. The one hundred year anniversary is in August, 2020...."

This installation features seventeen magnificent pieces of art honoring nineteen women who have made noteworthy contributions to American society.

One of the honored subjects, was included in a 2020 documentary which may be viewed on Netflix, Crip Camp. Suzanne and Lainey honored Judy with a portrait on a wheelchair.

Here's a TED talk Judy gave in 2018. You can see for yourself why she was included as a Noteworthy American Woman.

Other women included in the project include (but are not limited to) Arizona's own Gabby Giffords a former Member of Congress who has continued a personal fight to recover from being shot in the head on January 8, 2011; Phoenix area lawyer and Equal Rights advocate Dianne Post; and author of daily Letters from an American, historian Heather Cox Richardson.

“…I desire you would remember the ladies… If particular care and attention is not paid to the ladies, we are determined to foment a rebellion, and will not hold ourselves bound by any laws in which we have no voice or representation.” The Letters of John and Abigail Adams 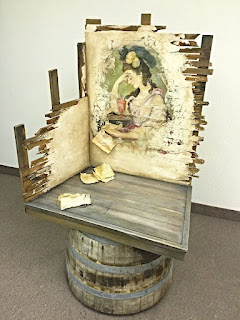 The installation will be available to view (no admission charge) through August at the Health Sciences Education Building on University of Arizona College of Medicine’s Phoenix campus, N. 5th and Van Buren streets (parking is accessible immediately north of the building at 5th St and Fillmore).


NOTE: this post previously reported that Judy Heumann had passed away last December. That was incorrect.
Posted by Steve Muratore aka Arizona Eagletarian at 2:15 AM No comments: