For let it be agreed that a government is republican... 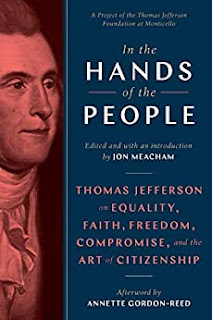 For let it be agreed that a government is republican in proportion as every member composing it has his equal voice in the direction of its concerns.... The true foundation of republican government is the equal right of every citizen in his person, and property, and in their management. -- Thomas Jefferson to Samuel Kercheval, July 12, 1816 From p 8, In the Hands of the People, edited by Jon Meacham.

The word "republic" derives from the Latin "res publica" literally meaning "the public thing." It is also translated, "for the public good."

His [Jefferson's} vision was one of hope. "Wherever the people are well informed," Jefferson wrote in 1789, "they can be trusted with their government, [and] whenever things get so far wrong as to attract their notice, they may be relied on to set them to rights." -- In the Hands of the People p xii.

I've shared this TED Talk previously, (and do so again) to highlight the point in time (July 2018) at which I became convinced that the American people would, when the opportunity arouse, reclaim their government from the demagogue who presided over it since January 20, 2017. Trump's election was legitimate. His presidency was not faithful to the people, to the Constitution, or to the Republic.

Sviatlana Tsikhanouskaya, ostensibly the winner of a recent election in the country of Belarus,
delivered this TED Talk, published today, which should serve as a warning of what could have been the fate of the United States if Trump's coup had succeeded. Even if Trump had, it would not have been the last word.
Posted by Steve Muratore aka Arizona Eagletarian at 4:32 PM No comments: 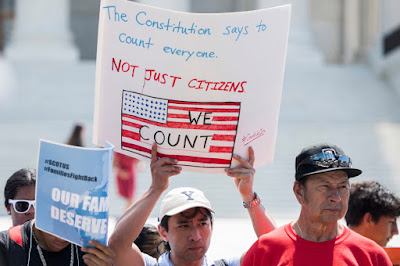 In a matter that could adversely impact Arizona's redistricting, and more importantly our state's representation in Congress in the coming year (decade), Trump continues to escalate the chaos he's instigating on his way out the door. From RollCall.com,
By Michael Macagnone
Posted November 23, 2020 at 5:30am

President Donald Trump faces what could be his last Supreme Court test in office on Nov. 30, when his lawyers defend his plan to exclude millions of undocumented immigrants from the congressional apportionment process.

Trump and his allies have argued that including such individuals in census figures used to reallocate congressional seats dilutes the power of voters in states with few undocumented immigrants. Three panels of federal judges have disagreed, sending the issue to the Supreme Court.

Several complicating factors — the end of Trump’s term, the time-sensitive nature of the census process, and the high stakes involved — will make for a fraught set of oral arguments.

Jonathan Turley, a professor at George Washington University Law School, said if justices spend more time on whether the challengers have standing to be in court at all, versus the merits of their arguments, it could suggest whether they ultimately will make a definitive ruling, or punt.

“This is one of those cases where we will learn a lot in oral argument,” Turley said, pointing to Chief Justice John Roberts’ leanings to preserve the high court’s independence.

The case has high stakes; the Pew Research Center estimates that Trump’s effort to exclude undocumented immigrants could shift as many as half a dozen congressional seats among the states.

The administration has pushed to execute that plan before losing control of the apportionment process when President-elect Joe Biden takes office on Jan. 20.

Trump signed the memorandum seeking to exclude undocumented immigrants in July. Shortly after that, the administration dropped efforts to extend the census count so Trump could still control apportionment calculations regardless of who won the November election.

An 'early off ramp'

If the justices cannot reach a strong majority on the merits, the “standing hawks” on the court may opt for a narrower decision that would effectively throw out the lower court rulings. That would let the administration move forward without actually addressing whether all immigrants count in apportionment, Turley said.

Roberts could be a key decider on taking that route, Turley said, as the court’s “ultimate institutionalist” trying to protect the court’s reputation.

“He will likely view this as a matter of great political controversy. He will not want to see the court fracture on an issue that has this importance to our democratic process,” Turley said. “So that might make Roberts more likely to pursue an alternative or narrow option.”

Should the Supreme Court reverse the lower court on technical grounds, states could then sue, saying the new apportionment hurt their representation in Congress.

Justin Levitt, a professor at Loyola Law School, doubts the justices would take such an “early off ramp.” The case would likely come back next year after wreaking chaos on the redistricting process ahead of the 2022 congressional elections.

“The Supreme Court can see pretty plainly the pain coming down the pipe, if they decide to punt on this,” Levitt said. “It's twofold. Every state in the country would be suing next year, and the disruption that would mean — waiting on that until we start the redistricting process, the delays involved, the uncertainty involved, is bad.”

The issues get thornier if the judges address the merits. Trump has appointed three justices to the Supreme Court, which has a 6-3 majority of Republican appointees, but that may not work in his favor.

The administration has argued that while the Constitution requires apportionment to be based on “all persons residing in a state,” the language and meaning are ambiguous enough to let them exclude undocumented immigrants. The administration says it also has the discretion to do so under the federal census statute.

Both Turley and Levitt said the conservative leanings on the bench could push justices to rule against the administration.

Levitt, who served in the Justice Department under President Barack Obama, argued the Trump administration has no wiggle room on the language in the Constitution.

“It’s the same as if he said ‘we’re going to count all of the rocks on the moon as residents of Texas.’ It’s not a thing,” he said. “There are lots of places of ambiguity, but the Constitution is abundantly clear that we count everybody, that everybody is represented. That was an authentically crystal clear choice.”

While most court watchers will focus on the new Justice Amy Coney Barrett, Turley said he’ll be keeping an eye on another Trump appointee. Justice Neil Gorsuch is a textualist and critic of the Supreme Court’s Chevron deference, which defaults to a federal agency’s interpretation of statute.

“It is Gorsuch that will be the most interesting in my view because of his criticism of Chevron and also because of his own textualist leanings,” Turley said.

Barrett has held up the late Justice Antonin Scalia, who championed Chevron, as a model for a justice. Neither Turley nor Levitt think that will shape her vote on the census case, though.

“I'm not entirely sure that people are being fair to Justice Barrett in treating her as a Scalia clone. It does disservice to her past writings,” Turley said.

“She's really written profoundly on legal issues in her own voice. There's no question she agrees with much of Justice Scalia's philosophy. But I think people have overplayed that as much as they did.”

Both Levitt and Turley said, however the justices rule, they may still have to address the issue down the road. If they come down in favor of the administration, California, New York and other states may file suit. If they come down against the administration, Alabama could continue to pursue its separate suit, from 2018, to force the exclusion of undocumented immigrants from apportionment.

*****
In other news, this afternoon, General Services Administrator Emily Murphy signed a letter authorizing access to federal funds for the Biden Transition. Murphy, either at the direction of or out of blind loyalty to Trump, had refused for more than two weeks to sign the letter which is a necessary part of the orderly transition of power after election of a presidential candidate other than the incumbent.

Due to testify before the House Oversight committee today, Murphy declined to show up. Perhaps she was reluctant to face Congresswoman Katie Porter and her whiteboard. Nevertheless, the efforts by Trump to force a coup and overthrow the US Constitution suffered a major setback with the news that GSA will begin to facilitate the transition.

Posted by Steve Muratore aka Arizona Eagletarian at 6:13 PM No comments: