Who is Ha-Joon Chang and why should you care? 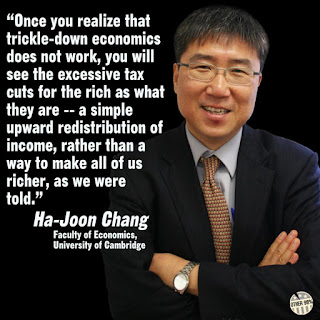 From where I sit, Professor Ha-Joon Chang is the guy who is now and will continue to provide a great deal of research and economic theory which will serve as philosophical underpinning for OurRevolution (following up on Bernie Sanders' earth-shattering and revolutionary presidential campaign).

Chang says he has been influenced by a wide range of economists,


Many people find it difficult to place me in the intellectual universe of economics. This is not surprising, given that I have been influenced by many different economists, from Karl Marx on the left to Friedrich von Hayek on the right. [...]

With the collapse of communism, people have come to dismiss Marx as an irrelevance, but this is wrong. I don’t have much time for Marx’s utopian vision of socialism nor his labour theory of value, but his understanding of capitalism was superior in many ways to those of the self-appointed advocates of capitalism.

Frankly, I believe advocacy for the philosophical underpinnings (economic theory) that will support OurRevolution is a much more productive focus than right now being overly concerned about how and why Bernie Sanders is not now the Democratic nominee for President.

Consider some of Chang's thoughts and perspectives on current issues. These clips are brief. Two of them are roughly two minutes; the third is about five minutes long.

and on so-called Free Markets

and on neoclassical (and neoliberal) economics

In 2018, there will be more statewide offices on the general election ballot in Arizona. Prospective candidates should be thinking NOW about preparing for those campaigns, all of them. Especially important will be the governor's race.

One factor in the 2014 contest between Fred DuVal and Scrooge McDucey was that the Democratic candidate did not adequately distinguish (contrast) himself with the opponent.

Despite Bernie losing out on the nomination this year, he set forth a powerful example of how to rally electoral support. In 2018 Arizona, there will be no need to be concerned about electing the first female governor for our state. So, let's see someone with DuVal's presence take Bernie's example to the next level.

Today it is a case of the grasshopper pitted against the elephant. But tomorrow the elephant will have its guts ripped out. Le Loi, Vietnamese emperor, 15th Century
Posted by Steve Muratore aka Arizona Eagletarian at 1:38 AM No comments:

On Friday, right before the weekend -- a traditional time to break news one hopes will not get much attention -- Arizona Public Service and its mother ship, Pinnacle West Capital Corp sued Corporation Commissioner Bob Burns in Maricopa County Superior Court claiming the subpoenas he issued recently are politically motivated and constitute illegal harassment. APS's action and statements are dripping with irony.


Arizona's largest utility is suing a state regulator for trying to determine if it used money from ratepayers to influence an election.

Arizona Public Service Co., in a series of legal filings Friday, said subpoenas filed by Arizona Corporation Commissioner Robert Burns are unlawful and is asking the court to make him pay legal fees and other costs.

APS accused Burns of using his official position to harass and retaliate against the company in violation of the First Amendment. They said he intentionally made demands to coincide with key election dates to influence the 2016 commission races.

"Commissioner Burns is demanding election-related disclosures based on his personal view that support for any particular (Arizona Corporation Commission) candidate should be open and transparent," APS Vice President Barbara Lockwood wrote in a letter to the commission Friday. "Arizona law does not require the disclosure he demands."

A spokesman for APS said Friday that the documents laid out the company’s position and he would have no further comment.

First, typically institutions targeted with litigation generally don't discuss pending litigation. APS launched this attack. One would think they'd want to tell their story about the situation. But they don't.

Might that be because the more attention the public pays to the lawsuit, the greater the likelihood it will backfire on APS?

Second, Arizona's two largest power utilities, APS and Salt River Project are ALWAYS, during legislative sessions, working diligently to exert political influence on lawmaking. While they do some of that work in the open, very few everyday citizens ever hear about it.

This blog has covered these issues on numerous occasions over the last four plus years. Scan through the archives (in the right hand column) for background insight.

For a utility that's accustomed to being protected by elected officials, don't you (now that Bob Burns is persecuting and harassing them) feel a deep sense of compassion for poor buggers like APS/Pinnacle West chairman and CEO Don Brandt (who reportedly makes $12 Million/year)? By the way, Pinnacle West (a publicly traded company) is worth, according to it's 2015 annual report, more than $7.1 Billion (see page 19 of the linked pdf file).


The squawking from an agency under investigation by the FBI for its role in the triumphant installation of Doug Little and Tom Forese, APS's wholly-owned stooges, seems a lot like a cat that got its tail caught under a rocking chair.

Beyond just the squealing, APS and Pinnacle West are conducting themselves as if they are cornered predators. That's not necessarily unreasonable. They are predators after all. And if Burns is re-elected along with Bill Mundell and Tom Chabin winning the two other open seats in November, they might actually be boxed into a corner.

A sweet set of possibilities for sure from the vantage of Arizona ratepayers and citizens.

Barbara Lockwood also wrote, in an item filed with the Corporation Commission,

One can read between the lines of Lockwood's letter to the ACC. She states that "no ratepayer funds have been used for political purposes." But as has been reported repeatedly over the last several years, APS has refused to deny spending money to influence the election of commissioners who will do its bidding. This is not simply "Commissioner Burns' personal view." It's widely understood public opinion based on APS's non-denial denials over the years.

APS is hoping to bypass citizen concerns about its plutocratic abuse of the electoral process by getting courts to again assert that Corporations are People.

We must not allow them to get away with it.

Today it is a case of the grasshopper pitted against the elephant. But tomorrow the elephant will have its guts ripped out. Le Loi, Vietnamese emperor, 15th Century
Posted by Steve Muratore aka Arizona Eagletarian at 12:41 AM No comments:

Is THIS the way to get voters' attention?

Though I've become pretty much disillusioned with the Arizona Democratic Party, these two candidates, Tom Chabin and Bill Mundell rise above the crowd because they are taking a stand to be proud of.

The last several years the Arizona Corporation Commission has been taken over by Arizona Public Service-owned henchmen.

Republican Bob Burns, the only current member of the ACC that has had the balls to stand up to the state's largest utility, has taken a lot of flack from the crony capitalists. When Mr. Burns was in the state legislature, I was no fan of his. But he has demonstrated genuine independence and commitment to his word in representing ratepayers and taxpayers since first elected to the ACC in 2012.

There are five members of that commission. They set policy and also act as judicial officers in matters of enforcement. If Arizona voters stand firm and elect Chabin, Mundell and re-elect Burns, the people of our state will be able to count it a victory. With three members (should Mundell, Chabin and Burns win in November), citizens will once again be able to build trust in a utility-regulating commission that answers to us rather than to APS.

We have the opportunity to reclaim that institution from the corruption it has operated under for far too long. Trash Burner Bob Stump is termed out and will no longer be able to serve his corporate masters in that role after the beginning of 2017. Andy (toxin) Tobin, appointed by Scrooge McDucey to replace Susan Bitter Smith, is also on the general election ballot. He too can and will be ousted if the message remains clear and focused for the next two months.

This is a crucial opportunity to demonstrate that Arizonans will no longer tolerate our state government earning the dubious distinction of being the most corrupt in the country.

Candidates for county-wide offices (such as Maricopa County Sheriff) will, if they intend to win, take a lesson from Mundell and Chabin, two guys with steel backbones.

Today it is a case of the grasshopper pitted against the elephant. But tomorrow the elephant will have its guts ripped out. Le Loi, Vietnamese emperor, 15th Century
Posted by Steve Muratore aka Arizona Eagletarian at 10:48 PM No comments: