Ducey, the Republican State Treasurer who's seeking to move up to the governor's seat, repeated the line that his goal is to "kickstart Arizona's economy" so often that it left some wondering if he'd changed the URL of his campaign website to that of a crowdfunding site.

As I see it, Ducey's hoping voters don't figure out what it actually takes to kickstart a project. In this case, a HUGE project. The Arizona economy.


Kickstarter is a vibrant community of people working together to bring new things to life.

Friends, fans, and inspired strangers have pledged $1 Billion to projects on Kickstarter, funding everything from homemade postcards to Oscar-winning documentaries.

So, how exactly does Ducey plan to kickstart the Arizona economy? Well, the Collins Dictionary online gives this example:


British English: kick-start kickstart To kick-start a process that has stopped working or progressing is to take a course of action that will quickly start it going again. VERB The President has chosen to kick-start the economy by slashing interest rates.

The analogy between this dictionary example and the real, live Kickstarter.com holds. In one, people decide to fund projects they believe in. In the example, kickstarting the economy by slashing interest rates is a mechanism to make financial institution funding less expensive. Therefore, entrepreneurs can more easily get loans for businesses to start up or grow.

Doug Ducey seems to want you and me to believe that he can kickstart the Arizona economy by eliminating the state income tax and by (whatever the hell this means) reducing the regulatory burden on businesses.

I can only guess, but might Ducey's regulatory burden reduction mean that he would make it easier for potential Cold Stone Creamery franchisees to obtain Small Business Administration loans?

What would it do to the economy to have even more failed Cold Stone franchises in Arizona? Who picks up the tab and what kind of drag does that place on the economy? Exactly how does that do anything to kickstart anything?


Would you loan someone money to buy a Cold Stone Creamery franchise if you knew that more than a quarter of those loans default? If you’re the U.S. government, the answer is yes.

Over the last decade, franchisees in the Cold Stone Creamery ice cream chain defaulted on 29 percent of working-capital loans backed by the government, costing taxpayers tens of millions of dollars, according to an analysis of Small Business Administration data published by the Wall Street Journal last week. The default rate for Quiznos, the sandwich chain that filed for bankruptcy in March, was 30 percent.

The franchising model offers would-be entrepreneurs the promise of a business in a box. Pony up some cash and get an established brand. Follow the franchisor’s instructions for running the business and sales should blossom—except when they don’t.

Cold Stone and Quiznos didn’t account for the worst failure rates, but their franchisees left taxpayers holding the biggest bills, with more than $72 million in charged-off loans between the two chains.

But Ducey does not and has not explained any plan for how he intends to kickstart the Arizona economy. Other than to cut taxes and eliminate (okay, maybe just "reduce") regulation.

How does austerity, the name for cutting government spending, kickstart an economy? Hint: it doesn't. From Foreign Affairs,


Unable to take constructive action toward any common end, the U.S. Congress has recently been reduced to playing an ongoing game of chicken with the American economy. The debt-ceiling debacle gave way to the “fiscal cliff,” which morphed into the across-the-board cuts in military and discretionary spending known as “sequestration.” Whatever happens next on the tax front, further cuts in spending seem likely. And so a modified form of the austerity that has characterized policymaking in Europe since 2010 is coming to the United States as well; the only questions are how big the hit will end up being and who will bear the brunt. What makes all this so absurd is that the European experience has shown yet again why joining the austerity club is exactly the wrong thing for a struggling economy to do. (emphasis mine)

The Koch brothers promote government austerity. Tim Phillips, at the helm of Koch-funded Americans for Prosperity -- about the Sequester -- wrote, in 2013,


As an example, I was out at a leadership event in Portland, Oregon this week where Beth, one of our dedicated AFP activists, told me how she had sent personal messages to each of her 243 Facebook friends asking them to contact their member of Congress to tell him to "keep the cuts" so we can "get our economy moving again." She had also personally visited her member's district office with her husband. (emphasis mine)

Even USA Today, the nation’s second largest newspaper after The Wall Street Journal, recognized the effectiveness of AFP activists and gave us the opportunity to articulate the importance of the sequester cuts. Here’s an excerpt:

“These modest cuts are an important step forward for economic growth. While perhaps painful at first, they will restore some balance to our fiscal system, allowing government to prioritize properly and function in line with the American people.” (emphasis mine)

AFP knows austerity does not kickstart an economy. It knows the opposite is true, even though Phillips downplays it, "while perhaps painful at first..." Painful for whom, really? Not the painfully rich Koch brothers.

Corporate newspapers in Arizona have wimped out and refuse to call Ducey on his brazenly deceptive claims about kickstarting the Arizona economy. News gathering enterprises should know that austerity doesn't kickstart anything except depression. That industry in America has been degrading rapidly, losing its customer base to disruptive technological innovation. All that has resulted from that is for newsroom staffs to be cut, cut again and then cut some more.

The result is about as far from a vibrant newsroom economy as one can get.

So, tell us again, Arizona Republic and Arizona Daily Star, how can you possibly continue to give Ducey a pass on his claims that have absolutely ZERO substance?

If you really want to understand the Ducey plan, do a case study on Kansas. Sam Brownback was a couple of years ahead of Ducey. Therefore we have data and record of what Ducey's austerity notions actually produce. 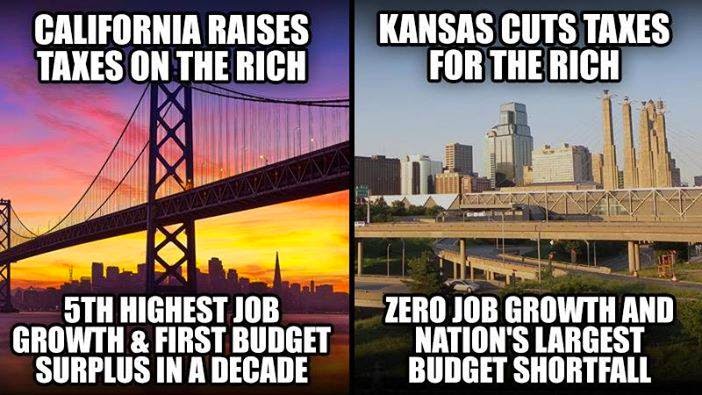 So, tell us, Ducey, how exactly is it that you intend to kickstart the Arizona economy?

Or maybe you're just trying to mimic Sam Brownback? Even the Wall Street Journal can see how that's a dumb idea.

More than 100 Republican officials endorsed the Democratic opponent of Kansas Gov. Sam Brownback on Tuesday, the latest sign of re-election troubles for one of the nation's most conservative governors.

Two former lieutenant governors, a former congresswoman and the state insurance commissioner were among the group pledging their support for Paul Davis, a Democratic state legislator who until recently was seen as a long shot in a state where Republican and independent voters far outnumber Democrats.

"We are deeply concerned by the direction Sam Brownback is taking Kansas," said Wint Winter, a former state senator who is backing Mr. Davis. "We are all Republicans. But we will always be Kansans first."

The unusual mass GOP endorsement of a Democrat illustrates the larger challenge for Mr. Brownback as he tries to woo voters from the center after pushing Kansas to the right during his first term. The governor has focused in recent years on cutting income taxes to spur robust economic growth so Kansas can compete with the likes of such powerhouses as Texas, which has no state income tax.

Prodded by Mr. Brownback, who cast the policy as a model for Republican governors across the country, the legislature cut the top income-tax rate by 25% as part of a plan to completely eliminate the tax. He also won their backing for the elimination of taxes on non-wage income for many businesses.

But the experiment has caused a steep drop in state revenues, while not yet delivering outsize economic growth.

Remember what much of the internet has noted Albert Einstein as having said,


...the definition of insanity is doing something over and over again and expecting a different result.

Don't expect that a Governor Ducey will make the Arizona economy more prosperous. His formula has been tried and found wanting.

Posted by Steve Muratore aka Arizona Eagletarian at 7:02 PM