Ducey boasts at Clean Elections debate that (Republican-owned Democrat) Catherine Miranda has endorsed him UPDATED 3:05 am 9-30-14

She apparently waited until after the deadline (September 25th) for write-in candidates to register for the general election, but Catherine Miranda has, according to boasts by Doug "Tooth Fairy Math" Ducey at the September 29 Clean Elections debate, declared her endorsement of the GOP nominee in the race for governor of Arizona.


Proud and honored to have the endorsement and support of @Miranda4Arizona! #azgov #Ducey2014
— Doug Ducey (@dougducey) September 30, 2014

Ducey, of course, is hoping for crossover votes. He has offered ZERO insight, rationale or valid reason for critically thinking voters to vote for him, but he doesn't think he needs that. If he can get key Democrats to endorse him, he won't necessarily have to offer anything legitimate as a reason for anyone to vote for him.

Many Republicans who unthinkingly vote for their party, will not need to be convinced. Most Democrats cannot be convinced to vote for him. But then there's the Independents and low-information Democrats who might decide based on someone else's thinking.

But WHY would Catherine Miranda endorse Ducey?

First, why would Republicans like Grant Woods, Paul Charlton and many more vote for Fred DuVal? Well, those Republicans are not obviously looking for something from DuVal in return for their endorsement. I respect the political positions of Woods and Charlton, even though I don't embrace the GOP.

Then there's Catherine Miranda. The Arizona Eagletarian began documenting her dissembling and dubious dealings with corporate interests that are at odds with the interests of her legitimate constituents in the spring of 2013.

She won the LD27 Democratic primary for the state senate last month. She is still a state Representative. But this is what she has on her Facebook page. 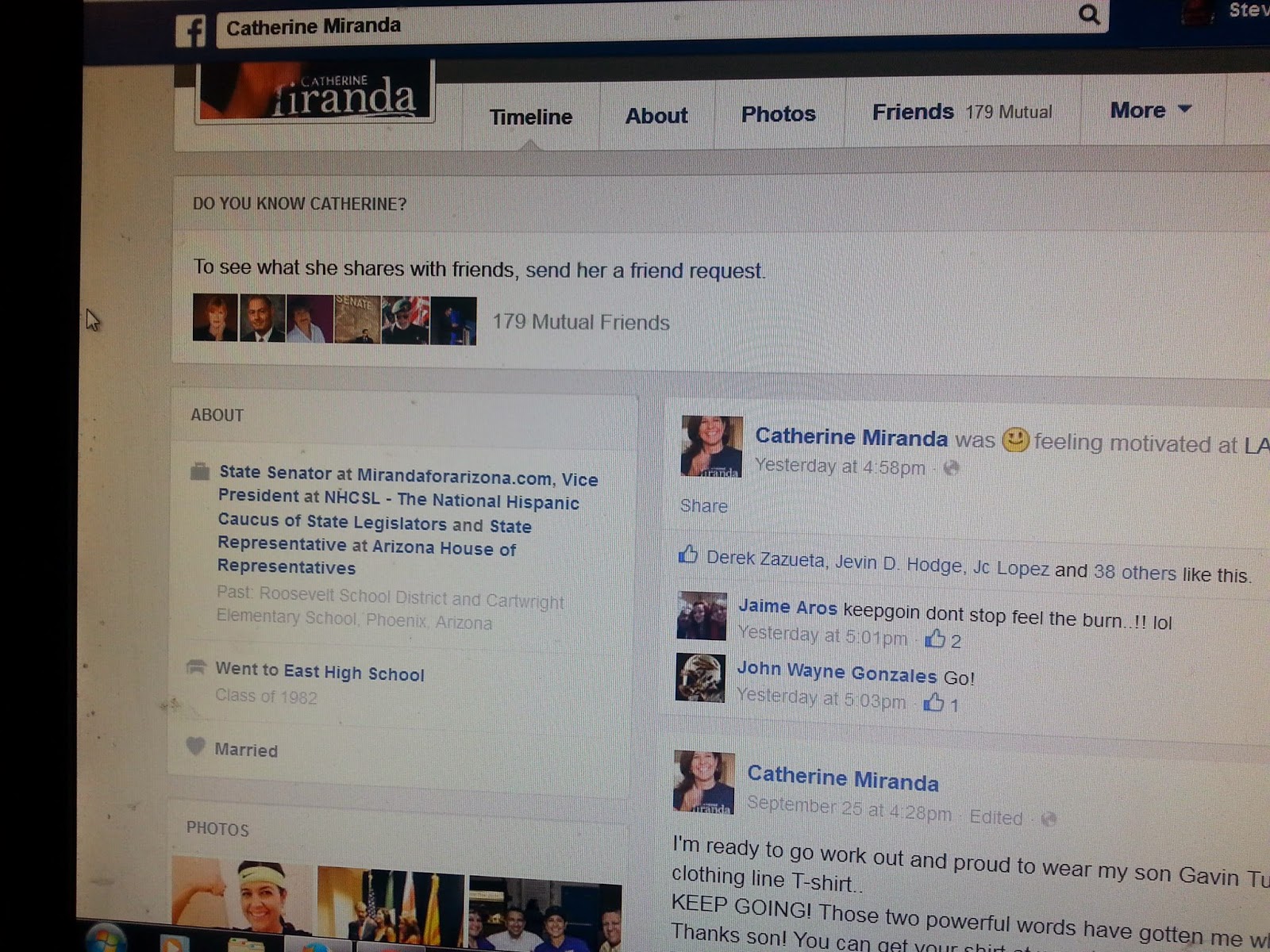 On September 29, 2014, REPRESENTATIVE Catherine Miranda (and not a very good representative at that) shows on Facebook that she is a "State Senator."

Some will say, "so what?" she will be a state senator. But what underlies the premature posting? Not only has she not taken the oath of office but she has not even been elected yet.

By the way, to me the concept of "legitimate constituents" is important. Who delegated their authority as citizens to her to serve as a member of the Arizona House of Representatives (in 2012)? It certainly was NOT Arizona Public Service or Cathi Herrod's Center for Arizona Policy. But when Catherine voted as the lawful representative of the citizens residing in LD27, she voted contrary to the interests of those residents.

Instead, Catherine voted to take away womens' self-determination over health care decisions. That's a Cathi Herrod constituency. Catherine voted to allow Arizona Public Service to escape accountability for environmental risks they take at Palo Verde Nuclear Generating Station. And Cathi Herrod, Arizona Public Service and their friends started paying for mailers telling voters how good a job Catherine has been doing for THEM (the ILLEGITIMATE constituents) at least as early as Spring 2013.

Mario Diaz' Dark Money operation spent more than $50,000 directly in support of Miranda in the primary. All told, various Independent Expenditures totaling more than $71,000 was reportedly spent advocating for her in that race. An additional $11,900 was spent in May 2013 on her behalf but was reported as being for the general election. Those amounts are just the IEs. Most of the IE donors refuse to disclose their identities.

Let's not forget the citizen complaint filed against Miranda for campaign finance/reporting violations the day before the primary election. No determination has been made on that as of yet by the Secretary of State's office.

A citizen this evening posted this comment to a Facebook discussion of Ducey's announcement of Miranda's endorsement.


I need to know how can we vote her out!

THAT is the salient question. Some folks wanted to point fingers at the Democratic Party. That's just misguided lashing out. The fact of the matter is that Catherine was given the opportunity to seek Maricopa County Democratic Party endorsement but just declined to even answer any questions from the screening committee. So, she did not get the endorsement. The only other thing the Party can do for her is to give her access to voter lists to facilitate canvassing door to door and by phone. If she had that in the primary, she will most likely not have it for the general election.

Then again, she thinks she is already a state senator.

To answer the question of how we can vote her out, the first thing I had to determine was the deadline for registering as a write-in candidate to oppose her. Any voter can write-in any name on a ballot, but only those write-in candidates who properly and timely register become eligible to have any votes cast for them counted. The deadline was September 25. Five days ago.

The next possibility is to meticulously document her every move in the senate starting in January 2015. At minimum, that will happen. Then APS and Herrod will not be able to spend enough money to hoodwink LD27 voters in 2016.

But the most immediate action that can be taken to vote Catherine Miranda out of the legislature will be a recall election that can be initiated once she takes office. She is not and will not be a new lawmaker in 2015. A recall can be initiated right away (anytime after five days subsequent to the start of the 2015 regular legislative session, January 19, unless the Secretary of State's office is open on Saturday, January 17). From Arizona Revised Statutes § 19-202,


A. A recall petition shall not be circulated against any officer until he has held office for six months, except that a petition may be filed against a member of the legislature at any time after five days from the beginning of the first session after his election.

Given that Catherine Miranda has committed violations of campaign finance laws, and has had her campaign volunteers tell bald-face lies to voters, any question about the timing of a recall effort beginning in January will be easily put to rest.

If Catherine thinks she will survive a recall by continuing to sell out her legitimate constituents, she will be sorely and tragically mistaken. The ONLY way for her to avoid the embarrassment, should a recall election be held, will be for her to meticulously avoid taking direction from the corporate and religious (Dominionist) interests who have thus far entangled her in their web of control.

An anonymous source has revealed that what Ducey offered Catherine was... the ability to get bills passed and signed into law in 2015. By the way, the Ducey campaign was not the least bit discreet about enacting this particular transaction.

Do you wonder how many other soon-to-be members of Arizona's 52nd Legislature were offered the same deal? I certainly wonder.

A Latino activist mused aloud this evening that Catherine sold her soul when she endorsed Michele Reagan. From my perspective, THAT transaction occurred sometime before 2014 (figuratively speaking). Another person indicated an awareness that Miranda had a South Phoenix "Old Guard" that made deals in backrooms and had secret handshakes and whispers. I don't know how true that is, but making this backroom deal with Ducey is pretty much the same thing.

Posted by Steve Muratore aka Arizona Eagletarian at 12:11 AM