Though he denied he's having fun, Republican David Schweikert sure looked and sounded like he's enjoying his job as the newest Representative from Arizona's Fifth Congressional District.

Traffic from Scottsdale to Tempe's South precinct police station was simply awful, but I was able to make my 5:50pm appointment for five minutes with Mr. Schweikert with two minutes to spare (at 5:48).  The town hall type forum was to start at 6pm and the training auditorium was already jam packed.

Schweikert's staff was gracious, recognizing my arrival was so extremely close to the appointment time.  And the Congressman was also gracious. After (very) brief small talk, I relayed (only) three specific concerns. Five minutes goes by incredibly fast, especially when that's the limit for the face time with one's Congressman.

I learned recently that the caseload for primary care medical providers at the Phoenix VA Medical Center is 1,400 veterans per provider.  Yes, one thousand four hundred.  Another source claimed the caseload was (only) 1,200 veterans per provider.  Still an incredibly high number.  My experience with the VAMC over the last four years had been that they responded very well when contacted by staff from Harry Mitchell's office.  Mitchell being Schweikert's predecessor and, at the time, chair of a key VA oversight subcommittee in Congress.

With the change in control of the US House of Representatives in January, the belt tightening (of the federal budget) has already had a dramatically adverse impact on resources for Arizona veterans' medical care.  My source also told me, though I've gotten conflicting answers when trying to confirm it, that several primary care providers (at the VAMC) had also recently quit.  The person also said a hiring freeze was in place, so replacement providers have not been hired.

In my case, a potentially severe medical problem was misdiagnosed in January this year.  Fortunately, the problem, though acute, passed and will not become chronic.  But I have to wonder how many other Arizona veterans have had medical near misses (or worse) recently.

Schweikert indicated he has some behind the scenes contacts in the VA system and would look into the situation.  Hopefully it will make a difference.

The second concern I relayed to my Congressman, also about the VA, is news (and here) a week or so ago that House Budget Committee chairman Paul Ryan (R-WI) had told a veterans group his committee will consider a proposal to drop Priority Group 7 and 8 veterans from the VA medical benefits system altogether.  Priority Groups 7 and 8 are veterans with no service-connected disability and with income and/or assets higher than certain thresholds (which vary by geographic region in the US).  I am not in either group.

Schweikert told me he had not heard that such a proposal was under consideration.  I asked him if Congress really wanted to take a baseball bat to that particular hornet's nest.  He said, without equivocation, that he did not believe the proposal would be given serious consideration.  I hope he's right on that point.

The third concern I raised had to do with the recently authorized Consumer Financial Protection Agency.  Elizabeth Warren, who has championed the cause has been in the news saying that Congress has been actively looking for ways to keep the agency from even starting.  Warren appeared on The Daily Show with Jon Stewart on Tuesday (April 26).

Schweikert told me he has met with Ms. Warren and is uncertain about what rules will be established for the consumer finance industry by this agency.  He said that lending agencies are saying they may not remain in the consumer finance business, depending on those rules.  I told him I thought that was mainly bluster and bluffing.  He, of course, graciously disagreed and our time was up.


Because of the crowd, I couldn't hear much of what Schweikert (or anyone else) had to say during the town hall meeting.  However, one point was memorable. 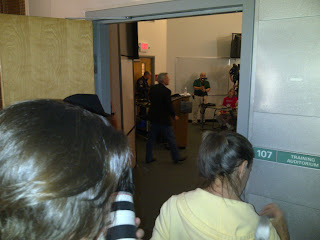 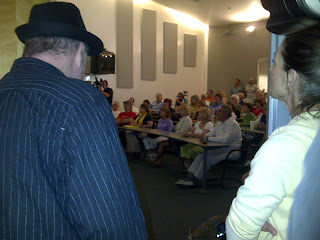 Congressman Schweikert relayed that many people "line up" at his office to lobby for him to do one of two things.  Of course, many call for increased federal spending on one thing or another. The other regular request is for help to develop, either by tax incentive (loophole) or some kind of change in regulation, a competitive advantage for their business.

The impression he gave is that he finds the practice distasteful.  And I agree.

But my hunch is that he will selectively take a stand, depending on whether the request is about something he believes in. After all, the way he characterized the consumer finance industry when he and I were chatting one on one, it sounded to me he favors giving them advantage -- at least advantage over consumers.
Posted by Steve Muratore aka Arizona Eagletarian at 12:21 AM