What's in it for ME? 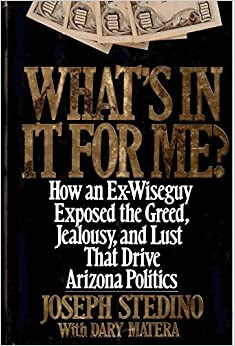 What's in It for Me?: How an Ex-Wiseguy Exposed the Greed, Jealousy, and Lust That Drive Arizona Politics by Joseph Stedino (with Dary Matera)

This is Joe Stedino/Tony Vincent's memoir of his time fronting the biggest political sting/scandal in contemporary Arizona history, AZSCAM. It's an important story that 30 years ago received widespread local and national news coverage.

Even though AZSCAM has faded from general citizen awareness, no doubt long time journalists, columnists, and pundits still hold it in the back of their minds (I hope). Politicians were spanked but not hard enough to eliminate corruption from the State Capitol. Academic researchers have noted within the last decade Arizona's ranking at or damn near the top of scales measuring that civic disease. Arizona's propensity for wacko politicians is even worse today than it was on the heels of the Mecham era.

First and foremost, Arizona and all of America is rife with fraud in general and corporate and political greed in particular.

From the inception of the American experiment, there have been pols exploiting loopholes in ethics laws and rules. The struggle has and must continue to tighten laws and rules that actually hinder the right of the electorate to assert self-determination.

Reading Stedino's AZSCAM memoir must jab the imagination to come up with more than just tweaks. Next up for me is Michael Waldman's The Fight to Vote. He cites among other things, a progression toward more direct democracy.

I contend that disruptive technological innovation has arrived or is on the verge of revolutionizing American political systems toward that goal/end. Certainly there will still necessarily need to be sufficient guardrails to prevent chaos and anarchy, but I believe it is within reach.

View all my reviews
Posted by Steve Muratore aka Arizona Eagletarian at 6:04 PM