Bipartisanship failed on expanding voting rights. Kyrsten Sinema and her backers ignore that.

Editor's note: Jim Small, managing editor at azmirror.com, in this editorial, first published on his site, quickly rips the mask off of Kyrsten Sinema. It is my opinion that if Sinema actually had a soul, that process might (emotionally) hurt her. -- Arizona Eagletarian 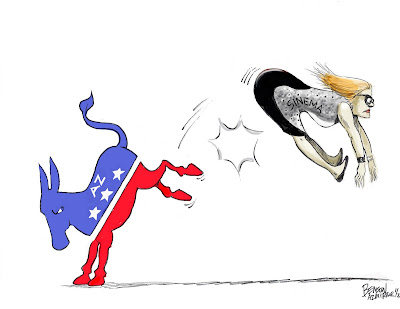 Bipartisanship failed on expanding voting rights. Kyrsten Sinema and her backers ignore that.

The corporate establishment wing of the Republican Party that supports U.S. Sen. Kyrsten Sinema is aghast that liberals are angry and might hold her accountable for supporting the filibuster, fearful that an electoral defeat would usher in a senator who wouldn’t carry the water for big business.

And that’s why the top advocate for big business in Arizona is spinning hard for Sinema in the pages of the Arizona Republic this week. In an op-ed, Danny Seiden, the president and CEO of the Arizona Chamber of Commerce and Industry, rallies to the senior senator’s side, sets up a straw man and accuses anyone angry at Sinema of being a hypocrite.

GET THE MORNING HEADLINES DELIVERED TO YOUR INBOX

Aping Sinema’s main theme from her Senate floor speech defending the filibuster as an integral mechanism for democracy, Seiden posits that Sinema has been a victim of “vile, threatening and dishonest attacks.” And the backlash from the Left, noting the filibuster’s noxious and racist roots, and how it has been employed most often to stop civil rights progress, is “overheated, hateful rhetoric” that are both false and “corrosive.”

“If anything is a threat to democratic discourse, it’s language like this,” he wrote.

After all, Seiden intones, bipartisanship is the Best Thing™ and is an end unto itself, so anyone attacking Sinema for committing to working across the aisle really wasn’t sincere — an argument that imagines liberals are angry with the senator because she dares to work with Republicans, not because she publicly derailed much needed protections of voting rights in America.

“Throughout her first term, Sen. Sinema has demonstrated the kind of bold and brave public service many people may have thought died with the late Sen. John McCain,” he wrote.

Ever since the Arizona Democratic Party censured Sinema, there has been no shortage of comparisons — frequently from establishment and corporate GOP apparatchiks — between her and McCain, who was famously censured by the Arizona Republican Party in 2014. Just two years later, he trounced Kelli Ward (who now leads the AZGOP) in a primary election on his way to a sixth term in the Senate.

The comparison fails in several ways. For starters, McCain had already been in the Senate for nearly 30 years when he faced the party’s ire. He was a war hero and was the most popular person in Arizona politics, loved by many for his “straight-talk” style of calling out what he saw as bad ideas, even from his own party.

Kyrsten Sinema has insisted on bipartisanship at all costs — even if it means refusing to stand up for American democracy. The result is that she stands arm in arm with the people who are actively trying to destroy it.

Sinema, of course, has built her entire political career on being an “independent voice” for Arizona. Though she’s a Democrat, she has no love for the party — which was a selling point for her 2018 campaign and her successful bid to court moderate Republicans and center-right independents. It’s not an embellishment to say that she’s modeled herself after McCain, who she has called her “hero”, and believes herself the rightful heir to his mantle.

But our McCain LARP-er missed out on one of the key things that her political idol understood innately: You can speak out against your party, and even vote against it sometimes, but never on core partisan values.

When the rubber met the road, McCain voted like a Republican because he was a Republican. Throughout his career, he knew better than to publicly embarrass the party by leading the opposition to blocking anything major. The lone exception to that was in 2017, when he marched onto the Senate floor to give a dramatic thumbs down, leaving the GOP plan to kill off Obamacare in tatters — a vote that was as much about a dying man sticking a very public thumb in Donald Trump’s eye as anything else.

Contrast that with Sinema, who doubled up on angering Democrats: Passing strong voting rights legislation is a part of the party’s platform, and ending the filibuster has become orthodoxy among liberals at a lightning-fast rate since Sinema was elected in 2018. She was warned by the party in 2020 that she’d face a vote of no confidence if she chose to stand with Republicans in propping up the filibuster at the expense of voting rights, but she opted to do so anyway.

There’s little doubt that her doing so has been a monumental political disaster that has left her already strained relationship with Democrats a smoking crater.

But it’s also telling that Sinema — and her corporate and GOP backers — are eager to ignore the reality of the choice that she made. Democrats were miffed when Sinema wouldn’t go along to get along on the infrastructure spending bill to seek a bipartisan compromise, but her success in doing so meant something ultimately was passed.

Investments in infrastructure are exceedingly popular among voters, and corporate America had long been clamoring for many of the programs that wound up in the bill. And there were Republicans willing to work to find a spending plan they could support.

The same can hardly be said for voting rights — and it’s not because Democrats didn’t try. They spent months trying to negotiate a compromise on the John Lewis Voting Rights Advancement Act. Only one Republican backed it.

Sinema is not backing the filibuster because it will lead to “better” voting rights legislation. There is no compromise forthcoming on this from Republicans, and she knows it. Their complaints are not made in good faith, and they have made it clear that their fealty to the Big Lie — or to constituents who believe it — is paramount.

Democrats aren’t abandoning Sinema because she favors bipartisanship. It’s because she has insisted on bipartisanship at all costs — even if it means refusing to stand up for American democracy. The result is that she stands arm in arm with the people who are actively trying to destroy it.

Posted by Steve Muratore aka Arizona Eagletarian at 9:08 PM