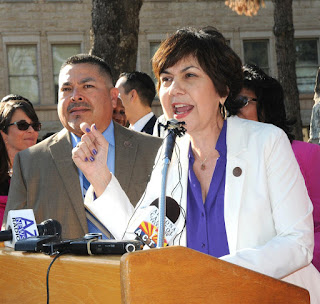 On Thursday, Republican House Speaker Rusty Bowers, likely knowing he did not fully have the authority to lawfully do so, selected Pima County Republican David Mehl to be a member of the 2021 Arizona Independent Redistricting Commission. There, at this time, is no assurance that Bowers will be speaker, after the election, a scant two weeks from now.

Also on Thursday, House Minority Leader Charlene Fernandez and Senate Minority Leader David Bradley filed a special action in Maricopa County Superior Court seeking declaration that the list of qualified candidates was not lawfully complete and must be revised before selection may begin. Along with the verified complaint, Fernandez and Bradley filed a Motion for Temporary Restraining Order to halt the selection process and the associated seven day deadlines for each of the partisan appointments to the AIRC.

PHOENIX – House and Senate Democratic Leaders filed a lawsuit early this morning to strike two registered independents from the slate of five candidates for Chair of the next Independent Redistricting Commission. The attached suit, filed in Maricopa County Superior Court, seeks to strike:

House Democratic Leader Charlene Fernandez, D-Yuma: "The chair of the Independent Redistricting Commission has an immense responsibility and obligation to be as free from political bias as possible to help ensure fair and competitive districts. Our Constitution prohibits lobbyists from serving on the commission, so that strikes Mr. Loquvam, whose name never should have been brought forward as a finalist by a Gov. Ducey's stacked Commission on Appellate Court Appointments. And what part of hosting a Trump rally, and Republican campaign events, makes anyone think Mr. Wilson will be impartial or fair?"

Senate Democratic Leader David Bradley, D-Tucson: “The Commission on Appellate Court Appointments entire nominating process has been corrupted ever since Governor Ducey stacked the Commission with Republicans and Republican-leaning independents. It’s been a blatant power grab from Republicans who know that the political tide is turning in Arizona. The importance of who serves on this Commission cannot be overstated, as the Independent Redistricting Commission will determine the boundaries of Arizona’s congressional and legislative districts for the next decade. Arizona is a diverse state and the members of this Commission need to accurately represent the multitude of people living in our state. As it stands now, the Commission on Appellate Court Appointments does not meet Arizona’s Constitutional standard.”