Vote Republican, End... this and EVERY other safety net program

There are MILLIONS of American voters who need a splash of cold water in their faces before early voting starts across the country... except that in some states (like Iowa), it already has begun.

Months ago, Republicans in Congress denied that this was their intent, but if you cut through all of Mitt Romney's flip-flopping and etch-a-sketch rhetoric and through all of Paul Ryan's obfuscation, there is NO denying that their ultimate intent is to eliminate the last vestiges of the New Deal (FDR) and the Great Society (LBJ). 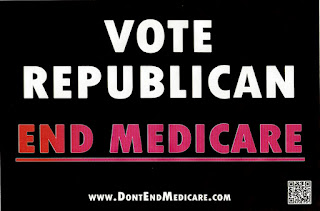 The Powell Memo (aka the Powell Manifesto) was first published on August 23, 1971, just a few short years after the implementation of Medicare.

The essence, sum and substance of the Powell Manifesto was a blueprint for establishment of a corporate plutocracy to dominate every level of government in the United States.

But independent and uncoordinated activity by individual corporations, as important as this is, will not be sufficient. Strength lies in organization, in careful long-range planning and implementation, in consistency of action over an indefinite period of years, in the scale of financing available only through joint effort, and in the political power available only through united action and national organizations.

Moreover, there is the quite understandable reluctance on the part of any one corporation to get too far out in front and to make itself too visible a target.

The role of the National Chamber of Commerce is therefore vital. Other national organizations (especially those of various industrial and commercial groups) should join in the effort, but no other organizations appear to be as well situated as the Chamber. It enjoys a strategic position, with a fine reputation and a broad base of support. Also — and this is of immeasurable merit — there are hundreds of local Chambers of Commerce which can play a vital supportive role.


The 2011 documentary film HOT COFFEE illustrates the role the US Chamber of Commerce has asserted for itself in American government, the judicial branch in particular.

The 2012 documentary just released by Bill Moyers, the United States of ALEC puts the American Legislative Exchange Council -- a lobbying cabal launched in September 1973 -- in perspective.

And the 2012 documentary HEIST: Who Stole the American Dream ties it all together by exposing the Powell Manifesto.

Additional insight into the Powell Manifesto is found on BillMoyers.com:


In this excerpt from Winner-Take-All Politics: How Washington Made the Rich Richer — and Turned Its Back on the Middle Class, authors Jacob S. Hacker and Paul Pierson explain the significance of the Powell Memorandum, a call-to-arms for American corporations written by Virginia lawyer (and future U.S. Supreme Court justice) Lewis Powell to a neighbor working with the U.S. Chamber of Commerce.

In the fall of 1972, the venerable National Association of Manufacturers (NAM) made a surprising announcement: It planned to move its main offices from New York to Washington, D.C. As its chief, Burt Raynes, observed:

To be more precise, what had become very apparent to the business community was that it was getting its clock cleaned. Used to having broad sway, employers faced a series of surprising defeats in the 1960s and early 1970s. As we have seen, these defeats continued unabated when Richard Nixon won the White House. Despite electoral setbacks, the liberalism of the Great Society had surprising political momentum. “From 1969 to 1972,” as the political scientist David Vogel summarizes in one of the best books on the political role of business, “virtually the entire American business community experienced a series of political setbacks without parallel in the postwar period.” In particular, Washington undertook a vast expansion of its regulatory power, introducing tough and extensive restrictions and requirements on business in areas from the environment to occupational safety to consumer protection.

While no individual elected office holder or other politician in the United States is above criticism, there can be NO doubt that the urgency for voting to keep the Presidency and both chambers of Congress out of the hands of Republicans is paramount in this 2012 general election season. What started forty years ago as an incredibly thoroughly thought out plan -- to regain its footing in what it believed was a political environment stacked against it -- has turned into a juggernaut that has completely decimated the American Middle Class.

The rhetoric on the (economic) Right is the same today as it was forty years ago. In 2012, we are bombarded by broadcast and print media propaganda proclaiming the socialist menace, even though the stock market is at or near all-time high levels. Business productivity, even in America, though MILLIONS of jobs have been sent overseas, IS at all time high levels. But worker income over the same forty years is STAGNANT. The cost of a college education has skyrocketed, with nearly all students, whether they succeed in earning a degree or not, encumbered by a mountain of debt.

There are only two ways to gain political power: organized money and organized people. Politics is ALL about conflict. Major political victories have been won across the globe (not only in the United States) as a result of vigorous, non-violent organization of the political power of individuals. To change our economic lot in life, WE must organize to demand the playing field be made level for American workers.

We must organize the power of our vote.

The bottom line to all of this is that voting Republican in 2012 is -- more than ever before -- a vote AGAINST your own self-interest, unless you are genuinely super-rich.

Then, as soon as the votes are counted and oaths of office taken for the new terms, we must organize to demand the United States Constitution be amended to overturn the Citizens United ruling.

Unfortunately, none of this is hyperbole. It's damned serious and may be understated. But we CAN cause change. And I will stand with YOU as WE wage non-violent campaigns to make the promise of the American Dream available to ALL Americans.


Posted by Steve Muratore aka Arizona Eagletarian at 8:43 PM