Sadly, Vernon lives up to expectations 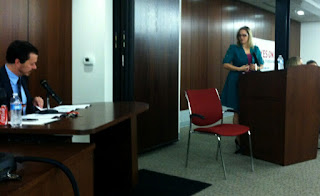 While it may seem silly to call it a debate with Parker's empty chair, the fact is that we are well past the point where there can be any guessing about Parker's campaign strategy.

Mr. Parker has repeatedly dissembled when asked about his willingness to appear face-to-face with Ms. Sinema to openly discuss issues of concern to citizens of CD9. Parker's dishonesty goes well beyond simple misstatement of facts.

The word dissemble connotes intent to conceal his real motives by pretence. The persistence and consistency of his practice of avoiding directly answering questions posed by (me or) journalists in mainstream media, as well as feigning desire to debate when asked by friendly media (conservative talk radio) has made this abundantly clear.

In fact, Parker has pinned his hopes on GOP Super PACs demonizing Sinema and scaring the socks off of voters. Television commercials broadcast on his behalf portray her as a space alien -- "she's really 'out there'" and worse.

The Arizona Republic, which has been virtually schizophrenic* in its candidate endorsements over the last week or so, had no choice but to emphatically recommend Sinema over Parker.

Parker would be a reliable Republican vote. Sinema would be just as reliably Democratic. If that's all that matters, you know how to vote.

But we look for more in a member of the House. And when we add up these factors, Sinema is the stronger choice.

Parker served in both Bush administrations. He brings a decidedly national view of issues to the race. Sinema's background is as a state legislator. That makes her more likely to tackle and deliver on Arizona issues, something Sen. Jon Kyl and former Rep. Gabrielle Giffords excelled at.

Giffords resigned. Kyl will step down in January. The rest of the delegation shows more interest in big issues. There's a big vacuum to fill, and Sinema is the congressional candidate most likely to fill it.

Her record in the Legislature suggests she will find a way to do this even if, as expected, Republicans maintain control of the House. Sinema understood that the only way a member of the minority party could get anything done was by working with the majority, including members whose politics could not be more different.

I've known Kyrsten Sinema for more than ten years. She is tenacious. She is a hardworker. There is no doubt in my mind that she can verbally run rings around Vernon Parker on any issue that could come before the next Congress. And she is hands down, the best advocate the voters of CD9 could get in this election.

I wish that the description of the Arizona Republic's editorial endorsements of candidates this month as schizophrenic was hyperbolic. Unfortunately, it is not. In some races, the Republic incisively sizes up the candidates. In others, it panders to a market it knows is precarious at best. Even when it does endorse a Democrat, it must tread lightly on the Republican, for fear of losing that market.

If the Arizona Republic's editorial board were to honestly evaluate every race for the legislature and Congress based solely or even just primarily on the individuals running in those races, it would have to acknowledge that the KOOKOCRACY that Laurie Roberts has recently begun campaigning against is the product of more than just nutjobs like Carl Seel or Sylvia Allen. Andy Tobin and Steve Pierce are given accolades as being sane and wise and better than the likes of Russell Pearce. But Tobin and Pierce, who hold the reins of each chamber, are complicit in outrageous legislative practices.

That makes the Republic complicit for not exercising legitimate watchdog journalism to call out those practices.

Posted by Steve Muratore aka Arizona Eagletarian at 1:54 AM