On March 29th, local attorney/advocate Dianne Post filed an 18-page complaint with the Arizona Corporation Commission charging that major public service corporations (PSCs), like Arizona Public Service -- regulated by the ACC -- are members of, and are funding ALEC, the American Legislative Exchange Council.

On it's Wednesday night (10pm) news broadcast, KPHO Channel 5 broadcast a clip of Post explaining the complaint. The KPHO news desk told me they expect to interview the president of APS this afternoon. Hopefully, that interview will air this evening.

This morning, the Arizona Working Families coalition held a press conference in front of the Arizona Senate to:


shine a light on ALEC’s influence in pushing legislation in Arizona aimed at attacking workers’ rights and enriching specific industries. 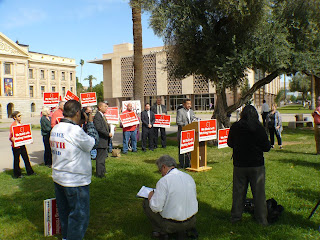 
The coalition presented an updated report on ALEC in Arizona. The 45-page report is far from comprehensive but does provide key insights on some of the current legislation before our elected lawmakers. These lawmakers, who clearly have more allegiance to ALEC than to the voters of Arizona, have pushed bills to erode the rights of working people, eliminate consumer rights granted in the Arizona Constitution, and further undermine public education.

However coincidentally, early this afternoon, Arizona Capitol Times' Jeremy Duda reported that APS has decided to end its membership in ALEC.

Arizona Public Service lobbyist Jessica Pacheco said the company will not renew its membership in ALEC, a conservative state lawmakers’ organization known for drafting model legislation for members to sponsor in their respective states.

Salt River Project, a quasi-governmental utility, is not regulated by the ACC but is, nevertheless, also considering dropping out of ALEC. SRP lobbyist Russell Smolden is the Arizona private sector chair for the business lobbying consortium.

Both Pacheco and Smolden downplayed the political pressure being brought to bear by consumer advocates these days and offered typical rationalizations for the "business decision" that has either been made or is in the works for the two biggest utility companies in Arizona.

Pacheco said the decision was economic, not political. She said APS’s new lobbying team, which formed about nine months ago, is reviewing all of its organizational memberships. The company is cutting costs, Pacheco said, and that cost-cutting includes ending APS’s memberships in organizations that don’t bring sufficient value.

Smolden, on the other hand, lashed out more in his rationalization:

Smoldon, who serves as one of ALEC’s Arizona chairmen – each state has a private sector and public sector chair – defended the organization, but acknowledged that it has come under increasing nationwide scrutiny.

“You have to consider it, considering all of the negative press that’s out there,” Smoldon said. “We’re looking at everything at the moment, trying to figure out what want to do, just trying not to be too quick to jump into the fray, so to speak.”

Smoldon said SRP still believes ALEC is a worthwhile organization, but has faced mounting pressure from liberal advocacy groups, public employee unions and the “spending lobby.” He said SRP has not received much pressure itself to distance itself from ALEC, outside of a few letters to the company.

“George Soros’ guys are the ones kind of driving the boat on this thing. So there’s a lot of misinformation at the moment associated with what ALEC does,” he said of the wealthy liberal financier. “This has been an ongoing assault on ALEC for the last couple of years by those folks who basically don’t want political discourse that disagrees with them.”

Smoldon said SRP would consult with many of the 56 Arizona legislators – all Republicans – who are ALEC members before making a decision. He said APS’s decision surprised him, considering how many Arizona lawmakers are ALEC members.

Perhaps Smolden had not yet been apprised of the complaint filed at the ACC against APS and other regulated PSCs. For Smolden to invoke George Soros fits nicely into the mindset of (former) public officials like Andrew Thomas who see themselves as crusaders against some intangible "evil liberal conspiracy."

Arizona Corporation Commission spokeswoman Rebecca Wilder told me this afternoon that Post's complaint is informal and will be reviewed by ACC Consumer Services Division staff. Wilder could give no timeframe or current status of the complaint but did say that if the Complainant is unsatisfied with the response, a formal complaint can then be filed.


From my seat at the keyboard, I see the work of volunteers like Dianne Post as making a tremendous impact on the side of everyday Arizonans. But Post's complaint and the movement by citizens to push back against ALEC has nothing to do with desire to stifle "political discourse." Rather, it's a recognition that ALEC has flown UNDER THE RADAR for too long, has dominated lawmaking in most or all 50 states and has defined the framework around which people view the discourse and the issues.

That defined framework gave rise to Regulatory Capture, undue influence in every area of public policy and overwhelming overreach in making and interpreting laws in our country.

It's time for an Arizona UPRISING.


According to Rebecca Wilder, elected Corporation Commissioners do not get involved in the informal complaint process. But if a formal complaint is filed, the Commissioners then review and will act on it. Post pointed out (on page 12) that Commissioner Brenda Burns has been active with ALEC, possibly as recently as late 2010 (after her election to the ACC) and that Burns should be recused from any action to rule on this matter.

Note: According to research dynamo and friend Lisa Hoffman,
"all of the past EIGHT (8) consecutive Arizona Senate Presidents have served in ALEC leadership roles"


Bob Burns has also been appointed by Brewer to the Appellate Court Commission on Appointments and is a candidate for the Arizona Corporation Commission for the fall of 2012.


Attorney/advocate Dianne Post informed me that if any of you (Arizona Eagletarian readers) would like to join the complaint, feel free to contact her by email at postdlpost@aol.com.

Additionally, state Sen. Steve Gallardo appeared in a sit down interview with Catherine Anaya on the Channel 5 news at 6:30pm this evening. I will try to get the video link to update this blog post tomorrow.

Anaya said they expect to have more on the ALEC situation on its 10pm newscast.
Posted by Steve Muratore aka Arizona Eagletarian at 3:19 PM